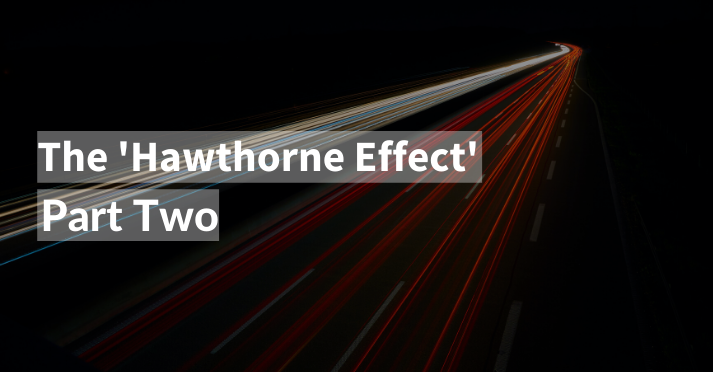 16 May The Hawthorne Effect – Part Two

Impact of the Hawthorne Effect

The Importance of Feedback and Coaching

As a follow on to the article on the ‘Hawthorne Effect’ H.M. Parson’s perspective on the tests offered the following insight “The ‘Hawthorne effect’ may only occur when there is useable feedback or a change in motivation”.

Closing this feedback loop provides a lot of positive benefits:

In the modern era, there is an increasingly wide adoption of video technologies in business.  All professional sportsmen and women use video for coaching to improve their performance.

Why would professional drivers be of any less value in giving them the best advice, guidance, and support to be effective in their tasks?

How long does change take?

21 days is a common answer.

This idea can be traced back to “Psycho-Cybernetics,” a book published in 1960 by Dr. Maxwell Maltz.

He referenced this number as an observable metric in both himself and his patients at this time.

He wrote: “These, and many other commonly observed phenomena, tend to show that it requires a minimum of about 21 days for an old mental image to dissolve and a new one to gel.”

Given this went on to be published in over 30 million copies, it widely became accepted as fact.

According to a 2009 study published in the European Journal of Social Psychology, it takes 18 to 254 days for a person to form a new habit. The study also concluded that, on average, it takes 66 days for a new behaviour to become automatic.

According to a 2012 article in the British Journal of General Practice, the psychology of forming a habit, it was noted that habits are, “actions that are triggered automatically in response to contextual cues that have been associated with their performance.”

For example, when you get into your car, you automatically put on the seat belt. You do not think about doing it or why you do it. Your brain likes habits because they are efficient. When you automate common actions, you free up mental resources for other tasks.

The bottom line, there’s no one-size-fits-all, some habits are easier to form than others, and some people may find it easier to develop new behaviours.

How does Change Work?

In the 1980’s Prochaska & DiClemente created the – 5 stages of Change framework – The Transtheoretical Model.

The stages outlined are:

The key element in optimising this as a business is to reduce the time taken to get from pre-contemplation to action.

As an observation, these stages are equally representative of organisations not just individuals when it comes to dealing with change.

The practicality of acquiring, sorting, and reviewing large volumes of on-road activity in video can be daunting, and it will vary in order of magnitude for any business based on a variety of configurations.

How many vehicles in the fleet? How many drivers? Hours of operation? These are just a few.

For many, this seems neither practical or cost-effective… But what if it was?

Technology such as Lytx’s DriveCam’s, Sensor Fusion 300 series – video event recorders, can be used as an alternative mechanism for the review and analysing all event video. It makes this process practical, efficient, and cost-effective.

The system gives the client team, such as a Fleet Manager or Safety Officer control over the behaviour they wish to manage and focus on, across a wide range of event and risk behaviours that can be monitored and assessed in near real-time by our Risk Analyst Teams and then giving them the tools to Coach (with direct one on one support from DriveRisk Customer Success Managers’).

Empowering them with the capacity and capability to take independent evidence and processes to effectively manage and coach drivers, to enhance safety and change behaviour, thereby reducing on-road risk.

(In a previous blog ‘The Origin of the ‘Hawthorne Effect’ we examined the underlying psychology of observation.)